Although a considerable amount of geographical data is presented in connection with the exodus and the trek to the land of Canaan, the exact identification of many places and regions mentioned remain unknown. The major reason for this is the lack of continuity among the populace of the desert-wilderness regions of the Sinai peninsula, the Negev, and parts of southern Transjordan. Without this continuity of population, the preservation of ancient place names is almost impossible. The other difficulty is that archaeologists have not discovered any artifactual remains that can be attributed to the Israelites in those regions through which they traveled. This, however, is somewhat expected, for a nomadic people, living in tents and using animal skins instead of pottery for containers, would leave few permanent remains behind.

Start of the Exodus Journey at Rameses

The city of Rameses was evidently in or near the land of Goshen, for at the time of the exodus it was the starting point of the Israelite departure from Egypt The site of Rameses has been well identified with Tell ed-Dab‘a that is located near modern Qantir.  Exod 12: 37  Num 33: 3, 5 Rasmussen, Carl G.; Rasmussen, Carl G. (2014-09-30). Zondervan Atlas of the Bible (Kindle Locations 2477-2479). Zondervan. Kindle Edition.

The exodus begins the day after the final plaque the death of Egypt's first-born,  both man and beast. Exod 12:12 The Israelites urged on by the Egyptian people, who were burying all their firstborn left Ramses with their unleavened bread, their livestock and objects of gold, silver and cloth given to them by the Egyptian people the day after passover.   The Israelites moved out quickly from Ramses to Succoth (booth in Hebrew), a border town or caravan stop in the Eastern Nile Delta. Exod 12:29-37 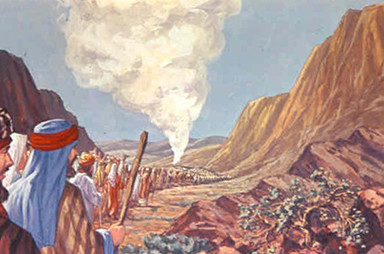 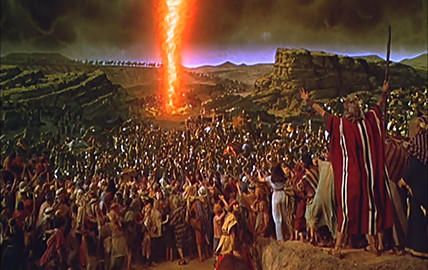 Succoth The Way of Shur

For fear of their becoming discouraged because of war, God did not lead the Israelites by the way of the land of the Philistines instead God led the people roundabout, by way of the wilderness at the Sea of Reeds.  Exod 13:17-18 They set out from Succoth, and encamped at Etham, at the edge of the wilderness. The LORD went before them in a pillar of cloud by day, to guide them along the way, and in a pillar of fire by night, to give them light, that they might travel day and night. Exod 13:20-21 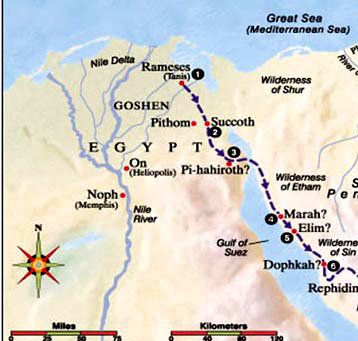 Etham at the Edge of the Wilderness

The reference to Shur and Etham place the Israelites in approximately the same place, that is, east of the lakes of the Isthmus of Suez, evidently traveling in a southerly direction.  The area in the Bitter Lakes is marshy and directly across from the Wilderness of Shur and within a 3 day journey to Marah.

From Succoth, they proceeded southward to Etham.  At Etham, Moses was instructed to turn back, that is, reverse the direction of their march. Instead of proceeding north to the Mediterranean coast, they were to head south to Pi-hahiroth, identified by some scholars as Pi-kerehet, the location of a sanctuary of Osiris at the southwest edge of Lake Timsah, directly across from the sacred site of the Canaanite god Baal-zephon on the other side of the water. At that point, they were to set up camp and await the arrival of the Egyptian army, which would be in pursuit of them, intending to drive them back into bondage.  Exod 13:21-22 Exod 14:1-4 Martin Sicker (2015-01-09). Reflections on the Book of Numbers (Kindle Locations 9091-9099). AuthorHouse. Kindle Edition.

Parting of the Red Sea

The exact location of Pi-hahiroth and Migdol are not known.  God ordered the Israelites to turn back and encamp before Pi-hahiroth, between Migdol and the sea, camping facing Baalzephon by the sea. Exod 14:2

The Pharaoh had a change of heart and regretted allowing the slaves to leave Egypt.  The Pharaoh send all the chariots of Egypt to destroy and capture the Israelites.  The people cried out in fear to the Lord as the Pharaoh's army approached.  Moses commanded the people not to fear to stand by and watch. The pillar of cloud shifted from in front of the Israelites and took up a place behind them coming between the army of the Egyptians and the army of Israel. There was the cloud with the darkness throughout the night preventing the Egyptian army from attacking the people of Israel.  God ordered Moses to raise his staff over the sea and divide the water so that the people could escape by crossing the dry land during the cloud of darkness.  At day break, Moses raised his staff to return the waters to their basin trapping and drowning the Egyptian army. Exod 14:10-29

Entering the Wilderness of Shur

After crossing the sea into the wilderness of Shur, the people of Israel started to complain about the lack of  water and food.

The possible location of Marah depends on the which location of Mt. Sinai that you accept or believe.  Exodus simply informs us that Mount Sinai is in “the desert of Sinai”.  At least 20 different mountains in the Sinai Peninsula, Jordan, and Saudi Arabia have been identified as possible locations for the mount of God.

The water at Marah was undrinkable (Marah is bitter in Hebrew) and the people grumbled about the lack of water to drink.  God shows Moses a piece of special wood, which Moses tosses into the water making the water sweet.  God promises to protect the people of Israel in the desert if they obey him.  Exod 15:23-26 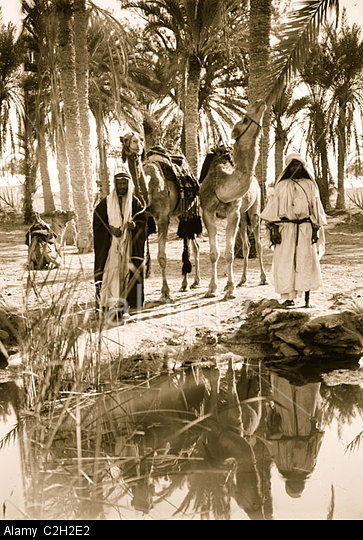 The location of Marah and Elim, where there were twelve springs and seventy palm trees, depends on where one locates Mount Sinai.

Leaving Marah and they went to Elim, where there were twelve springs and seventy palm trees, and they camped there.  Setting out from Elim, the whole Israelite community came to the wilderness of Sin, which is between Elim and Sinai.  Exod 15:27 16:1-2

The people complained to Moses and Aaron about the lack of food.   God rained down bread called manna from the sky in the mornings and quail covered the camp at night.  Exod 16:3-13

Campsites in the Wilderness of Sin

The location of Rephidim, the last campsite before Sinai is unknown but close to the rock at Horeb.

All the people and herd animals moved through the Wilderness of Sin in stages camping at Dophkah, Alush and Rephidim  The campsite at Rephidim was called Massah and Meribah - The place was named Massah and Meribah,  because the Israelites quarreled and because they tried the LORD, saying, “Is the LORD present among us or not?”  Moses accompanied by some of the elders went to the rock at Horeb and struck the rock with his rod as instructed by God to provide sweet water for the people and the animals.  Exod 17:1-7

The battle with the Amalekites— it has been suggested, was the consequence of the Israelites being denied access to the major water sources. Hoffmeier, James K. (2005-09-17). Ancient Israel in Sinai: The Evidence for the Authenticity of the Wilderness Tradition (Kindle Location 4630). Oxford University Press. Kindle Edition.

The Amaleks’, a nomadic desert tribe,  unrelenting brutality toward the Israelites began with an attack at Rephidim.  Moses ordered Joshua to take men and fight against Amalek.  Moses, Aaron and Hur went up to the top of the hill overlooking the battleground.  The ebb and flow of the battle depended on Moses holding up and lowering his arms with the help from Aaron and Hur.  The success of the army of Israel depended on God's protection and promise to utterly blot out the memory of Amalek from under heaven.  Moses build an altar and named it the Lord is my Banner.  Exod 17:8-16

On the third new moon after the Israelites had gone out of the land of Egypt, on that very day, they came into the wilderness of Sinai. Exod. 19: 1

In modern times, Sinai denotes the entire triangular peninsula between the Mediterranean Sea and the Red Sea, in the Bible it appears that Sinai is a single mountain that sits in a desert named the Wilderness Of Sinai. Exod 19:1

Moses is reunited with his wife, sons and father-in-law Jethro at the Mountain of God.  Jethro advises Moses to appoint able men to subdivide the workload of judging men while Moses represents the people before God.  Moses listened to Jethro and did all that he advised.  This is the beginning of the organization of a judiciary for the people of Israel.  Exod 18:1-27