Encamped at the mountain of God

Moses, Aaron, Nadab, Abihu and 70 elders of Israel ascend the mountain but only Moses can approach God.  Exod 24:1-2 Moses receives the 2 stone tablets with God's teachings and commandments.  Exod 24:12-18
From Mt. Sinai to Kadesh Barnea

The tabernacle was to be the focal point for the nation, both in a physical and spiritual sense. Moses receives the precise instructions for the tabernacle, a movable tent with 3 main sections, from God during his 40 days and nights on the mountain.  Exod 25-27 God tells Moses to ask the people of Israel to bring gifts of gold, silver, copper, blue, purple and crimson yarns, linen cloth, hides, oils, acacia wood and gem stones for the tabernacle.   Exod  25:2-7 Each of the 3 main sections, the Courtyard, the Holy Place and the Holy of Holies, contained special sacred objects and was a place of different sacred activities.  Tabernacle Construction Images
From Mt. Sinai to Kadesh Barnea
While Moses is receiving God's commandments and instruction for constructing the tabernacle. Aaron gives in to the demands of the people melting and recasting the gold into a golden calf.  Exod 32:1-6 God orders Moses to go down off the mountain at once because the people are obstinate amd stiff necked corrupting themselves by worshipping an idol and disobeying the one true God.  God speaks to Moses of his anger and disappointment and even suggests destroying all the people and starting again with Moses alone. Moses pleads with God to relent and reminds God that these are your people whom you delivered from bondage and the covenant promises made by God to Avraham, Isaac and Jacob.  In response to Moses' pleadings, God changes his mind about destroying the people and renews his covenant promises to the people of Israel.  Exod 32:7-14
From Mt. Sinai to Kadesh Barnea

Moses descents the mountain carrying the 2 stone tablets with God's commandment.  Exod 32:15-18 Moses returns to the camp at the foot of the mountain and confronts Aaron and the people.  In anger, Moses breaks the stone tablets into pieces at the base of the mountain and burns the golden calf idol to ashes.  Moses then makes the people drink the water with the ashes to humiliate the people because of their shameful acts of infidelity to God.  Exod 32:15-20 Moses stood up in the gate of the camp and said, “Whoever is for the LORD, come here!” And all the Levites rallied to him. Exod 32:26
From Mt. Sinai to Kadesh Barnea

Moses takes his tent, called the Tent of Meeting, outside the camp area. When Moses entered the ten, the pillar of cloud would descend in front of the entrace of the tent while Moses meet with God.  Exod 33:7-9 On God's orders, Moses carved 2 new tablets of stone, carried the tablets up on Mount Sinai and God wrote his teachings and commandments again on the tablets.    Moses returns to the people waiting in the camp after spending another 40 days and 40 nights on the mountain re-receving the stone tablets with God's commandments and covenant and his face shone.  Exod 34
From Mt. Sinai to Kadesh Barnea

Beginning the Second Year after the Exodus from Egypt

The Tabernacle was completed and dedicated on the 1st day of the 1st month of the 2nd year.  This was about one year from the time the people of Israel arrived at Sinai.  The work building the Tabernacle is completed when the cloud  covered the Tent of Meeting, and the Presence of the LORD filled the Tabernacle.  Exod 40 Num 7,8

God orders Moses to take a census of every male able to bear arms from the age of 20 years up grouping them by their ancestral tribes.  Num 1:1  All the Israelites, aged twenty years and over, enrolled by ancestral houses, all those in Israel who were able to bear arms— all who were enrolled came to 603,550.   The LORD spoke to Moses and Aaron, saying: The Israelites shall camp each with his standard, under the banners of their ancestral house; they shall camp around the Tent of Meeting at a distance.  Num 2:1-2

Each of the twelve tribes were assigned specific places and responsibilities in the camp and on the march.

Entering the Wilderness of Paran

On the 20th day of the 2nd month of the 2nd year since the Exodus, the pillar of cloud lifted from the Tabernacle, and the people of Israel set out on its journey from Mount Sinai and enter the Wilderness of Paran.  The people of Israel marched in order of their tribes, organized into divisions led by the heads of each tribal group.  Num 10:11-28 They marched from the mountain of the LORD a distance of three days. The Ark of the Covenant of the LORD traveled in front of them on that three days’ journey to seek out a resting place for them.  The LORD’s cloud kept above them by day, as they moved on from camp. Num 10:33-34
From Mt. Sinai to Kadesh Barnea

From Horeb by the way of Mt. Seir to Kadesh Barnea

As soon as the people left Mount Sinai they begin once again  to complain to Moses and to God.   God in his anger sends a fire that destroys the outskirts of the encampment.  All the people cry out to Moses who prays to God for peace.  The place was called Taberah from the Hebrew word burn.  Num 11:1-3
From Mt. Sinai to Kadesh Barnea

The people of Israel complain that they are hungry having only manna to eat.  The people recall eating fish and vegetables during their enslavement in Egypt and demand meat to eat.  God tells Moses to gather 70 elders and to tell the people that the next day and for an entire month they shall have meat until it becomes loathsome to them.  Num 11:4-20 God summons a wind to sweep huge flocks of quail from the sea over the camp.  God is so angered by the gluttony of the people that he inflicts people with a severe plaque and many people died.  The place was called Kibroth Hattavah - the "Graves of Craving" because the people who had the craving for meat were buried there.  Num 31:34
From Mt. Sinai to Kadesh Barnea

The people then set out for Hazeroth.  Miriam and Aaron Complain about and challenge Moses' authority because Moses had married a Cushite (Ethiopian) wife. In response to this challenge the Lord called Moses, Aaron and Miriam to the Tent of Meeting and reconfirmed Moses' status and authority.  God. in anger, struck down Miriam with leprosy, making her ceremonially unclean and an outcast within the community.  Miriam's public challenge to Moses was a very serious sin and she was publicly disgraced in exile from the camp for 7 days until she was cleaned. The people set out from Hazeroth to camp in the Wilderness of Paran, near Kadesh Barnea, after Miriam was readmitted to the camp.  Num 12.
From Mt. Sinai to Kadesh Barnea 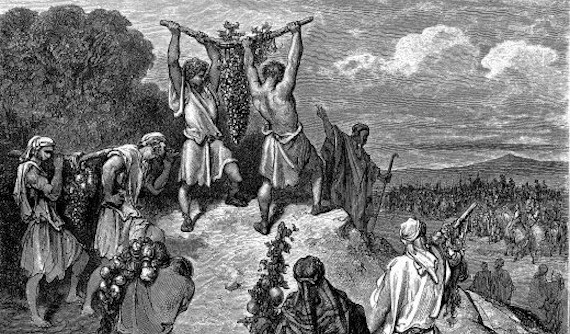 A chieftain from each of the ancestral tribes, 12 in all, were sent by Moses to Canaan in order to gather information about the land, the people living there, the types of food available and  the size and strength of the settlements and cities.  Num 13:2-20 The spies began in the South at the Wilderness of Zin and went as far north as present day Damascus.  The entire expedition took 40 days and they returned to the encampment located at Kadesh Barnea with their reports.  Num 13:21-26
From Mt. Sinai to Kadesh Barnea
Load More